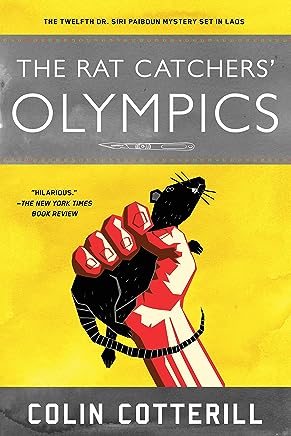 Dr. Siri Paiboun, a 1980’s Laotian coroner, is an unlikely Olympic hero, but he goes to great lengths no one can prove in order to be included in the Laotian delegation to the 1980 Moscow Olympics. My favorite quote:

“So here he was in the cockpit of his large Soviet metaphor.”  -Colin Cotterill, the Rat Catchers’ Olympics

This series is hard to categorize.  Are they historical fiction detailing Laos during the Cold War, or are they paranormal cozies featuring an aging doctor whose wife acquired a tail from a spirit-healer’s anti-arthritis potion?

I don’t know what to call them, but I love how Cotterill wraps me in Laotian heat and humidity as he weaves his crazy tales. I ever know where he’s going to end up, but I sure enjoy being along for the ride.